I listened to another BBC radio report about gun violence in America today. Maybe someday all the cultural voices will ring true and I’ll be safer with a gun than without one.  But the one time I actually traveled with one in public, I decided using it would have been counterproductive.

In the days before ubiquitous cellphones and XM radio, the I-20 drive across Texas was nothing to take lightly, especially with two children and a dog. Leaving Arizona in a Dodge conversion van — aka, Living Room on Wheels — I dreaded the three days of nothing but Texas.

I did have a VCR that mounted just behind the driver’s head and connected to a television. And well before my trek began, I had mastered the one-handed art of hitting rewind, pushing play and changing tapes all the while still driving.

No, my only real worry was car trouble even though the van was relatively new. Looking it over before leaving, I saw just one weak spot: the tires. The back left looked a little low to me — but what did I know?

My former spouse assured me he would check it out before I left. But when the morning of departure came and I asked about the tire pressure, I was told (1) he hadn’t checked it after all. And (2) here was his Glock; I should take it for protection.

So with low air in the back tire and a 9mm under the front seat, I started the drive to Alabama.

Traveling at 70 mph 35 minutes outside El Paso, I heard a boom somewhere behind the van. I pretended it had nothing to do with me until the vehicle began to bounce.

Sure, if I could find the spare, I could try to change it. But if a flat at interstate speeds was bad, surely an improperly installed spare careening off the van and onto the shoulder would be worse. So I looked around for a kindly trucker to help me.

On the other side of the highway, one was climbing out of his cab. I watched the road for an opening in traffic to run across and ask for help about the time he opened the trailer’s back door for 15 Hispanic men to exit.

Scanning the horizon for a Plan B, I saw a man outside a moving truck in a rest area 60 yards previous. A woman gathered trash as he walked their dogs. Here seemed a safer chance. But worried by the man running illegals, I hesitated and considered retrieving the gun.

If the driver of the moving truck appeared more threatening up close, I could point it at him while I asked for help.

Or I could shoot him ... but then who would change my tire?

So I opted to approach him unarmed. Besides, the person I wanted to shoot was in Arizona.

The truck driver knew exactly where the spare was kept on a Dodge van. As I unloaded a summer’s worth of luggage so he could get to it, he told me his cargo was due in Atlanta by noon the next day.

“Do you think we’ll make it?” he asked me, as he tightened the last lug nut. The question was rhetorical, but my thanks were not. As he refused any offered money, I wished there was some way I could have thanked him more. It wasn’t until years later I realized I could have given him the gun for all the good it had done me.​ 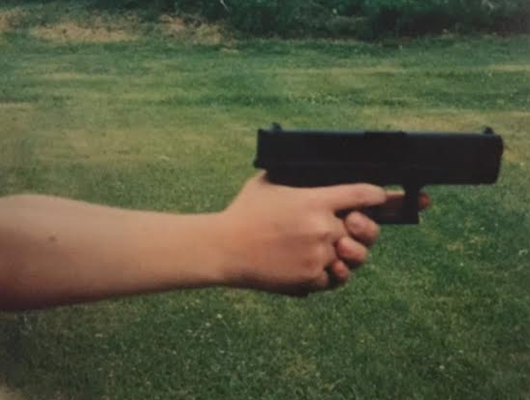