Piney Grove is among the modern and scenic campgrounds along the Tenn-Tom Waterway. 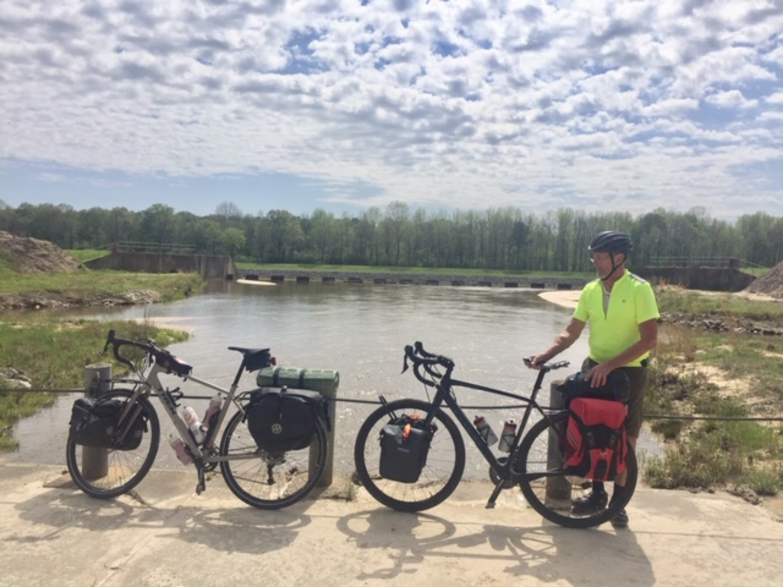 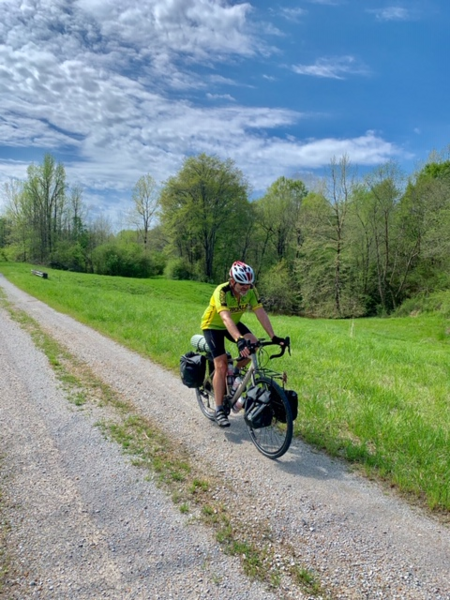 If you prefer a one-day, mostly gravel loop, try this alternative Garmin map.

After two days of pedaling loaded touring bikes on everything from lonely gravel roads to busy state highways, we faced one more hazard.

Heavy rainfall occasionally floods creek crossings on the levy roads along the Tennessee-Tombigbee Waterway in northwest Mississippi, making them impassable. If Yellow Creek rushed across the path ahead, we would have to backtrack 10 miles and find another route to our car.

To our relief, the water over the road was low enough for us to push our bicycles across steppingstones and get back under way.

This trip was part of my recent exploration of the waterway’s road system, which may appeal to the growing number of bicycle riders tapping into the gravel-bicycle craze.

While the Tennessee-Tombigbee Waterway Authority’s mission includes recreation, the body doesn’t provide any information about its many miles of well-maintained crushed-limestone roads. Search online for bicycling the Tenn-Tom and you’ll come up empty.

This seems like a missed opportunity because the Tenn-Tom’s levy roads resemble many popular Rails To Trails, which provide recreation for millions of users across the nation.

Hank Luking takes advantage of a tailwind while heading toward the Scruggs Boat Ramp Bridge near Iuka, Mississippi.

Florence, Alabama, artist Hank Luking and I set out on an April morning on the Tenn-Tom levy road from the east side of the U.S. 72 bridge near Burnsville. Our journey began at the parking area for the Divide Section Wildlife Management Area, which shares Tenn-Tom property.

Thunderstorms stopped rumbling before dawn and the clouds parted, leaving us with a bright blue morning. With the canal on our right, we pedaled southward along the grass-lined pathway past blooming dogwoods and wildflowers, beneath brilliant variations of tender spring foliage and puffs of cotton clouds.

I wondered if Hank was dreaming of paint on canvas.

We pedaled beasts of burdens, weighted down with 25 pounds of camping gear, food, water and other supplies. We toiled on gravel roads, left mushy by the previous night’s rain. We fought our way against a 23 mph headwind, gusting to 31, according to the National Weather Service.

On a lightweight gravel bike in dry conditions, the levy roads provide a fun, flat and fast ride over a hard-pack surface. Under the conditions we faced, the roads offered a slow grind, with plenty of time to absorb the scenery.

Along the way, we passed a granite obelisk marking the former town of Holcut, an old stagecoach stop that pioneers settled before the Civil War. The U.S. Army Corps of Engineers bought out and demolished the town in 1976 because it lay in the way of the developing waterway.

After about 14 miles of gravel, we arrived at Paden, a 141-person town, where we turned east onto state Highway 30 and then Highway 25 toward Tishomingo. These two-lane highways have deep rumble strips cut into the shoulder. We shared narrow roads with log and dump truck drivers, who hurtled down the highway as if they were ambulance drivers on the way to an emergency call.

Finally, we made it to the calmness of the Natchez Trace Parkway, which offered less traffic. The headwind was still brutal, buffeting against our panniers, but the route was mostly downhill for about 10 miles.

When we turned off the Trace and onto the John Rankin Highway, we hooked back toward the north,. This change in direction provided a merciful tailwind to push us toward the day’s destination.

We arrived at Piney Grove Campground midafternoon and checked in at the office. The Corps of Engineers facility is a fine place to camp, with clean restrooms and showers, and full hookups.

Of course, our self-propelled RVs were basic. We pitched our minimalist tents next to Bay Springs Lake and lay back on the concrete picnic table seats to recover from the day’s toil.

Hank — the restaurant manager turned artist — never seems hungry, much less starving. At my insistent urging, he fired up the camp stove and boiled water to pour into my freeze-dried meal. Instructions printed on the meal’s container said it held two and a half servings of teriyaki chicken, about right for one of me after a hard day in the saddle.

Noisy campers, perhaps made stir crazy by a lingering COVID-19 pandemic, crowded into the campground as daylight waned. But the place fell silent after the 10 p.m. quiet time.

The only manmade intrusion was the haunting echoes of towboat foghorns on the waterway. The 234-mile Tenn-Tom — a system of 10 dams, locks, lakes and canals — connects the Tennessee River to the Tombigbee/Black Warrior rivers, creating a navigable barge route from the nation’s midsection to the Gulf of Mexico. 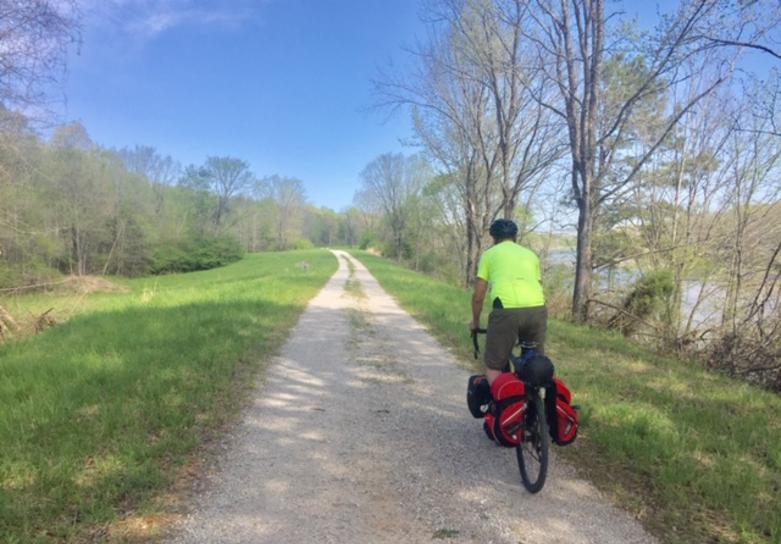 We rose on a cool morning with sunlight beaming into our tents, music provided by songbirds. Breakfast down, sleeping pads and pillows deflated, sleeping bags and tents rolled and stowed, we climbed back on the bikes and started the three-mile climb out of the campground.

A friendly tailwind pushed us along the ridge top above the lake and on toward Mississippi Highway 365, part of Adventure Cycling Association’s Underground Railroad Route. I traveled through this section in 2019 when I cycled the Underground Railroad from Mobile, Alabama, to Owens Sound, Ontario. The route runs adjacent to the Tombigbee River and Tenn-Tom Waterway for much of its way through Mississippi.

We made our way toward Burnsville over rough pavement rutted by heavy trucks, but we were able to find a narrow strip of smoother asphalt near the road’s edge.

Hank’s bicycle wouldn’t shift into the big chain ring, so I left him behind going down the roller coaster hills. As soon as we started climbing the next hill, however, my fitter and faster riding companion sped past me. We played this game of seesaw for several miles.

Hank was using the ride to train for an upcoming 740-mile tour from Kentucky to Yorktown, Virginia, along the Trans-America Route. I had no doubt he would be ready.

From Burnsville, we knew my car was just two miles away, if we took a shortcut across the Tenn-Tom canal on the U.S. 72 bridge. We were tempted to bail out, but decided to extend the fun and stick with our plan for about 17 more miles on the gravel levy roads.

The tailwind continued to push us on the path, which was much drier and faster than on the previous day. We negotiated the overflow of Yellow Creek across the path with little trouble and soon arrived at Scruggs Boat Ramp Bridge. We traversed the Tenn-Tom on Highway 25 and looped back in the opposite direction on another levy road.

Now, we were slogging back into the insufferable headwind toward our car. I struggled over the final eight miles. Hank was kind enough to ride at my tortoise pace and encourage me with motivational words like “cheeseburger” and “french fries.”

We melded a well-known national bicycle route with nameless gravel lanes. We pedaled miles along a waterway built for international commerce, surrounded by solitude and nature.

Soon, the 84-mile ride ended, leaving us with that satisfying feeling of accomplishment that comes after a self-styled adventure.

Florence, Alabama, artist Hank Luking takes a break at a creek crossing along the Tenn-Tom Waterway near Iuka, Mississippi.

Smooth gravel roads run along both sides of the Tenn-Tom Waterway, although access may not be available in all sections. We rode the east side of the waterway between the Scruggs Boat Ramp Bridge near Iuka and Paden, and the west side from Burnsville to the Scruggs bridge. 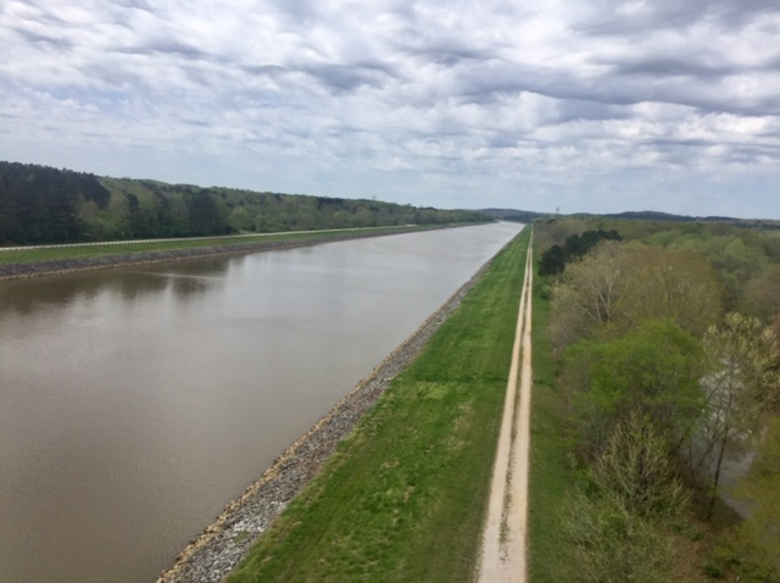 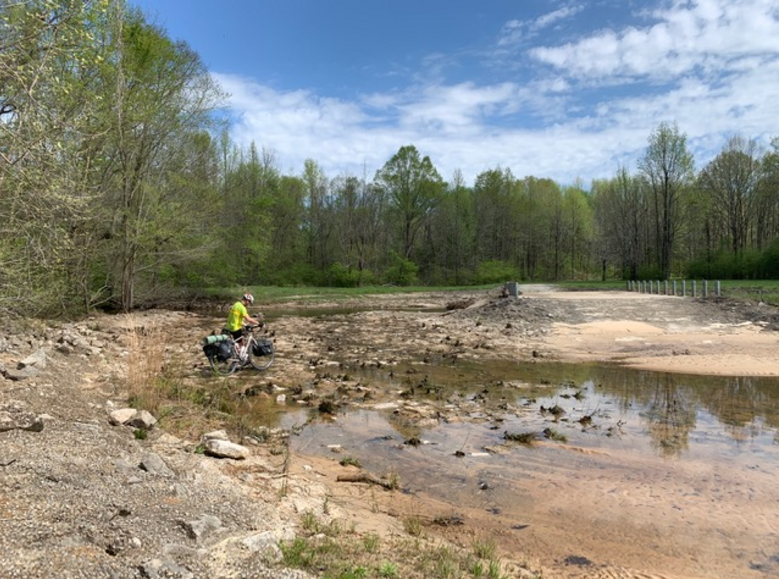 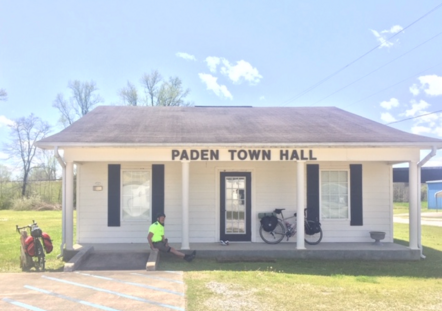 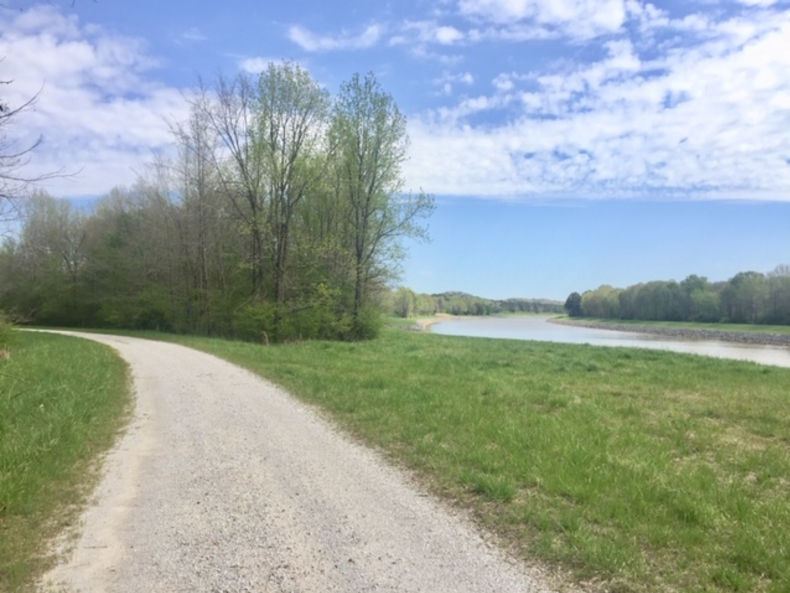 The Tennessee-Tombigbee Waterway in Mississippi features miles of gravel roads that resemble Rails To Trails.

The Tennessee-Tombigee Waterway connects barge traffic in the midsection of the nation with the Gulf of Mexico using a system of 10 dams, locks, canals and lakes.

After 14 miles of gravel on the first day, we stopped for a break at Paden, Mississippi. 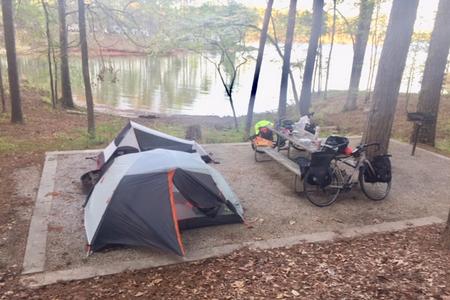 Bridges along the Tenn-Tom have overflow areas that can be impassable during flooding. We were able to walk around the overflow at Yellow Creek by using steppingstones.