Boys of Christmas past

Minutes are all I have, and they keep adding up to years.

One morning last week, deep in bows and tugging at the end of a wrapping paper roll, I realized some of those years have passed again. Specifically, the years of the little boys.

The signs have been all around me for a while now. I just haven’t seen them.

Sure, when son No. 4 left in July, I knew the house had changed. I left the bed in his room to accommodate all the quilts I would make, but nothing else stayed the same.

After I cleaned the bathroom, it sparkled for days, not just until the next shower.

And the frozen, gluten-free pizzas lasted out the week and into the next.

But that morning as I passed the wrapping paper tube from one hand to another, I realized Christmas has its own signs and I began to list them in my mind.

So here are the top five ways I know the boys have grown up at Christmas:

No. 5: They ask me what presents they should buy their sisters.

No. 3: They are more interested in the menu for Christmas dinner than the candy in their stockings.

No. 2: I no longer head straight to the Lego aisle to buy their gifts.

And the No. 1 way I know the boys have grown up this Christmas: Instead of refereeing wrapping paper roll fights, I’m carrying the cardboard tube to the recycling bin.

On second thought, I’ll stick this one in the back of some closet. It will start my collection in case I need to bribe some next generation Jedi warrior to come in close enough for a sticky kiss or stubby-armed hug. I’ve had my turn at both, but I’ll gladly get in line for seconds. 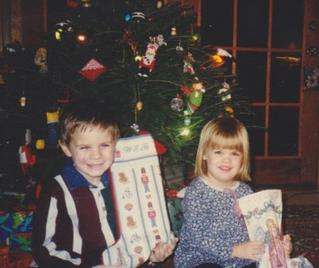