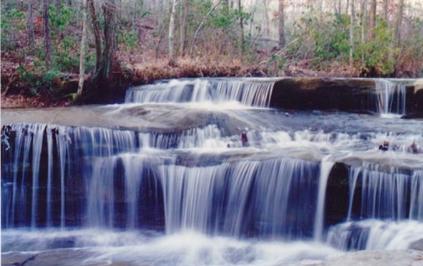 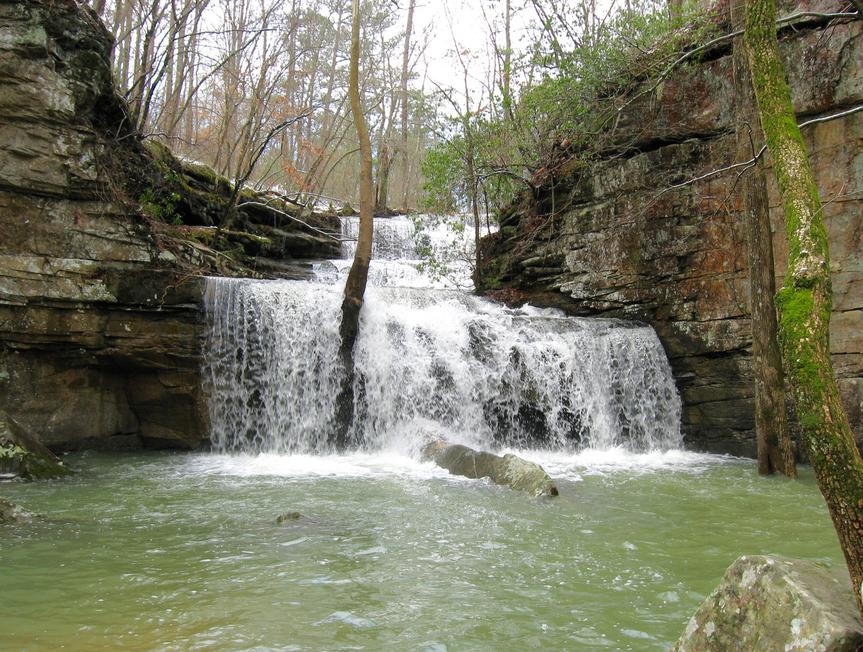 Seven Falls Creek plunges off Burney Mountain like a forlorn Indian princess. Then disappears into an abyss.

The stream re-emerges from a cave and joins Sally Mike Creek in a rugged place that beckons me.

I first discovered this spot riding shotgun in an old Volkswagen Beetle with a distant cousin and high school friend nicknamed “Zero” because his last name was “Nunn.” Zero sped headlong into the ford across Seven Falls Creek and the force of the water almost stopped his VW cold before splashing back down onto the windshield. We were young and stupid, and found it great fun.

Sometime later, I hiked downstream from the ford and found all seven waterfalls and the colorful cliffs around them.  I saw where the water disappeared into a cave below. On another trip, I explored farther down the mountain to where the water blew out the exit of the cave.

I returned many times through the years to enjoy the beauty and solitude of the place, and to rappel off the bluffs with friends.

Then, in adulthood, I learned this setting in rural south Morgan County, Alabama, was connected to two pioneering branches of my family. Those branches — the Morrises and the Speegles — would some day take opposite sides in the Civil War. But when they settled near here in the early 1800s, they had to carve out a community in the dense wilderness.

Here, the Southern Appalachians flattened into the Hartselle Plateau in a geographical feature that divided the planters from the hill people, who scratched out a living as hog farmers, millers and moonshiners.

Armed with family stories, a topographical map and a strange obsession that I cannot explain, I struck out in the cold of winter on a daylong adventure that took me deep into the canyon. Trespassing across private parcels, I vacillated between an urge to wear hunter orange to announce my presence to any deer hunters and the wish to travel undetected by anyone.

An old newspaper story reported that a slave was killed here during the war when a boulder collapsed on him while he was mining for saltpeter. To my surprise, Saltpeter Cave appeared on my map. It turned out to be a rock shelter rather than a cave, but it bore marks of mining. A family story mentioned a feature called Blowing Springs, which also was on the map, and which I also located.

I had never paid much attention to Sally Mike Creek, but I discovered that my great-great-great-grandfather’s name was Michael Speegle, he was married to a woman named Sally and they lived along the creek. I will hold on to the belief that the creek is named for them until someone sets me straight.

My great bushwhacking adventure eventually ended at a vast beaver swamp, which I knew trickled into Flint Creek and on to the Tennessee River.

I returned from this trek muddy, exhausted and relieved that no hill people had shot me. And I wondered if my feet had tread the same ground that my ancestors farmed, fished and hunted almost two centuries before.