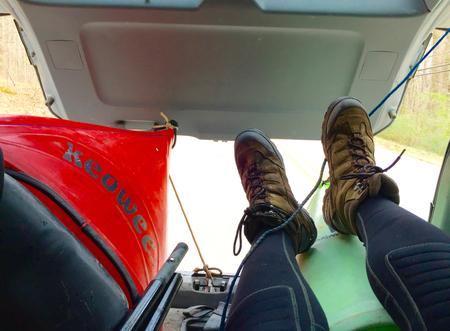 When backpacking was my passion I sometimes hitchhiked back to the car after a few days on the trail.

Although I could usually bum a ride, I remember one particular trip to the Great Smoky Mountains when the practice didn’t work out so well.

For some reason no one at Newfound Gap was willing to pick up a hatchet-bearing unshaven, uncombed, unwashed stranger. Go figure.

So, after struggling for days up and down the Appalachian Trail and various feeder paths, I was stuck with the prospect of hiking an extra five miles with a heavy pack along the shoulder of U.S. 441.

Every time a car approached, I stuck out my thumb in hopes that some Good Samaritan would shorten the suffering of my aching feet. I stumbled along for what seemed like hours with no success until finally a car stopped and a man got out.

The driver’s car was full of belongings so he had to spend several minutes rearranging the contents to accommodate my backpack and me. At last, we climbed into the car, strapped ourselves in and drove off.

It was a short trip.

When we went around the first curve, I immediately spotted the lot where my car was parked. The entire ride was less than 100 yards long.

Embarrassed at putting this kind stranger to so much trouble, I apologized several times, got out, retrieved the backpack and left.

Recently — as I sat in the back of a minivan squeezed between two kayaks, paddles and personal flotation devices — I thought back to all the methods I have employed to get home after an adventure.

Probably the most dangerous involved the old recycled school buses that rafting guides drive at death-defying speeds around sharp curves on mountain roads along the Ocoee, Nantahala and Gauley rivers. On other trips, friends and I — being the simpletons that we are — spend several minutes trying to figure out the logistics of getting back home.

On one backpacking trip, I drove to the finishing point, hid an old bicycle in the woods, chained it to a tree, and then motored to the starting point. When I finished hiking, I unlocked the bicycle and coasted down the mountain to the car. Occasionally, I use the same strategy on solo kayaking trips. As I have gotten older and lazier, however, I often just call Jenny to retrieve me at the finish line.

Getting from Point A to Point B is simple. Getting back to Point A requires a bit more thinking, especially since I gave up hitchhiking after that short ride in the Smoky Mountains.