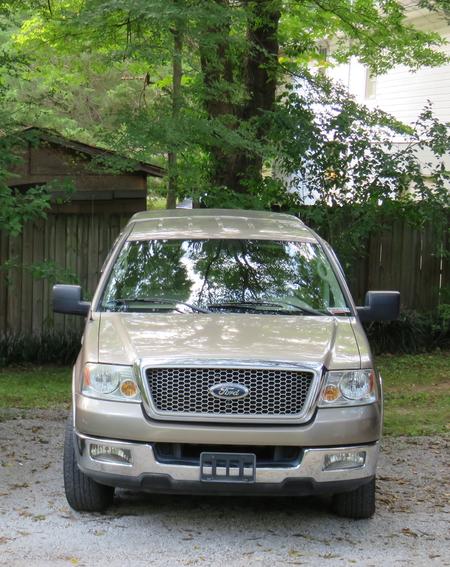 Towing a U-Haul trailer at 55 mph from Ohio to Iowa requires a special kind of endurance for both driver and passenger.

Moving Daughter No. 1 to Iowa over Labor Day weekend became an exercise in endurance for Scott. And that didn’t even include all the driving he got to do.

We took the F150. A good decision as far as packing volume was concerned, but a bad one in that we had never traveled in it a long distance until this trip.

Honestly, I had begun to think we bought this truck to ferry Scott, friend Wayne and their bicycles all over north Alabama. Yet when talk of the logistics of moving Daughter No. 1 from Cincinnati to Des Moines, Iowa, commenced, the comment Scott made second in frequency to “You know the trip will be 27-plus hours of driving going the speed limit” was “We’re taking the F150.” Incidentally, he made the comment on the driving hours at least 31 times. He said we were taking the truck once.

As I figured he was driving, I didn’t respond. Perhaps I should qualify: I didn’t say anything about taking the F150 before we left for Cincinnati. I said plenty when we were in it and on the road.

Years ago, in a moment of what I thought was touching early marriage honesty, I told Scott, “I don’t like change.” It must not have been that early, because Scott just stared back at me, mentally counted to 10 and said, “I know.” The F150 is a far cry from the Toyota Highlander we usually take on trips. I compare the 8-year-old Highlander’s ride to butter, smooth and sweet.

In addition, the F150 has no foot room for the nest I like to construct for long trips. Typical items I need within reaching distance are my computer, the cord to charge my computer, DVDs to watch on my computer, textbooks to read ahead for the ever-coming next lecture, three pairs of glasses, my purse, snacks ... That’s the short list. But really, I have to bring something along to amuse myself while Scott drives 27-plus hours.

Combine the limited foot room of the F150 and its riding discomfort with a little hobby my ankles picked up sometime in the last decade. They swell to twice their normal size whenever a seat is just a bit too high for my feet to comfortably rest on the floorboards. Did I mention the seat height of the F150? Not to you, maybe, but rest assured Scott’s heard about it.

On day five of our jaunt, about the time we started passing Confederate flags in southern Tennessee, I told Scott my final assessment of the F150, and that this was my final ride in it for any lengthy trip. Then I abandoned my post at shotgun to wait out the final hours home from the back seat.

And there I learned my place in life, or at least my place in the F150. A woman whose feet won’t comfortably reach the floor in its front seat can stretch out with room to spare in the back. And when Scott’s annoying girlfriend — that voice on the GPS that he will follow anywhere — told him to detour through eight miles of winding county roads, I slept through it all.

So, take the F150 on our next visit to Iowa? Sure, just let me grab my pillow.