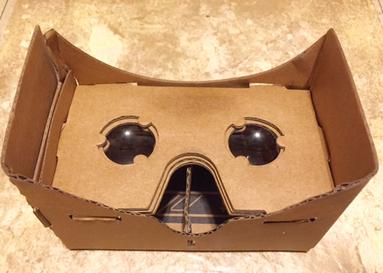 Any effort by a middle-aged instructor to amaze a group of young people with new technology is laughable. But there was that one special day.

My college students can outtext, outtweet, outsnapchat, outfacebook, outinstagram, outstorify and generally outapp me with one thumb tied behind their backs. I usually have to count on their superior technical skills when the classroom audio goes silent or the projector doesn’t project or the printer refuses to print.

But by keeping up with the latest news — now there’s an antiquated activity — I can sometimes introduce students to new ways of telling stories.

My latest effort involves a piece of cardboard.

Google has partnered with other companies to develop the poor man’s virtual reality. Basically, it’s a piece of cardboard with eyeholes cut out so you can watch a 3D news documentary on a smartphone.

When I told my students I was ordering one of these Google Cardboard gizmos, they actually seemed interested. In fact, they started badgering me to bring it to class.

As Daughter No. 2 ordered the new virtual reality machine for me with her superior online ordering skills, she asked what color I wanted.

“I think anything called a Cardboard should be cardboard colored,” I answered.

And so it was.

It was an exciting day when the $16 piece of cardboard-colored cardboard arrived in the mail. Daughter No. 2 cut it out and folded it into a small box to hold my iPhone. I downloaded a free app from the New York Times called NYTVR and entered the world of virtual reality.

Through the cardboard VR viewer I watched a New York Times documentary about children who have been displaced by war and I walked beside them through the rubble.

Companies are investing billions of dollars into virtual reality. These investors include Facebook, a contact-lens manufacturer, Disney, architectural software firms, the NBA and a health-care company that is developing VR technology to help eye surgeons remove cataracts.

As is usual, the video-gaming industry is leading the way. Destroying zombies in 3D remains society’s No. 1 concern.

But despite the recent investment to bring virtual reality to the masses, VR is still in the brick-size cellphone stage, according to tech expert Ted Schilowitz.

When I walked into class with the brick-size cardboard box attached to my face, the students laughed. We passed the Google Cardboard around the room and immersed ourselves in another world. And for a brief, glorious moment, my superior grasp of technology was a reality.