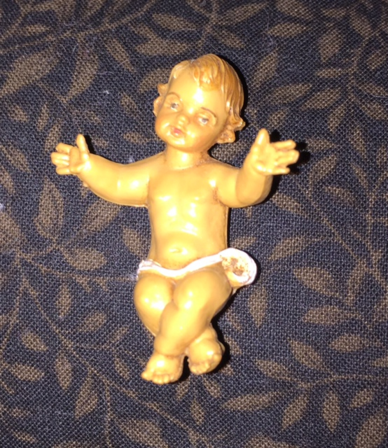 Years ago, I lost Jesus. In my defense, he didn’t take up much space and I only got him out on special occasions anyway. For a man of Jewish heritage, my Jesus was of strikingly light complexion, about the color of the packing paper that movers wrapped around my belongings on a regular basis.

The children were always taking him to play with, but they usually put him back. So I don’t remember when I realized he was gone gone, as opposed to just missing. I only know that by the birth of my fourth child I had become a fourth Magi.

Once in a mall in New York, I thought I had found him. And I did, to an extent. But when I brought the plastic figurine home, a toddler-sized Jesus loomed from the manger scene, arms outstretched toward Mary.

About the same time, someone who knew of my quest also found Jesus. In true friendship, she shared him with me. But all I gained was the first replacement’s twin.

One interesting side effect of the substitute Jesus, or Jesuses, was that the children no longer found the figures appealing. Un-Jesus-like, he demanded all eyes on him as he dwarfed the crèche. But we dutifully placed one of him in the nativity each Advent, and carefully packed the two away each move.

Somehow it wasn’t the same, this Jesus who didn’t quite fit the spot designed for him. And to make things worse, there were too many of him. So when I prepped my household goods to move to Turkey, I decided to leave the Jesuses behind, along with the wooden stable and his admiring, though diminutive, throng. Safely in climate-controlled storage, the trappings of the season would await our return.

Celebrating Christmas in a Muslim country would be complicated by having no decorations to unpack. But I anticipated using BX-purchased glass balls and 220-voltage colored lights. What I didn’t anticipate was the attack on the Twin Towers less than one week after we moved to our house on the Aegean coast.

Military aircraft, our mail service, reduced to flying personnel and matériel. Trucks from Germany brought uniforms and boots. There were no Christmas decorations to be had, although I did find a plastic tree that arrived sometime in August. For ornaments, we improvised.

A year later, having moved to downtown Izmir, we were able to frequent the BX every week. Routine shipments had resumed, not to the extent as before the 9/11 attacks, but enough that holiday decorations trickled in. And on one of those weekly jaunts, I found Jesus.

Next to the cash register, he lay in a bowl of discarded trinkets and plastic angels. The local national employed by the NATO governments saw my joy and delightedly pulled out more. “Here,” she said, “here is another one!”

“You only need one Jesus,” I told her, and promptly put him in my purse.

All our other recently acquired decorations were packed, so that’s where he stayed throughout my remaining months in Turkey, my brief weeks in Italy, and my flight back to the United States.

Eventually, I placed him with the crèche inside a Ziploc bag. But my words to the cashier have swirled in my head these 12 years since that February 2003. I found the one Jesus in Turkey, and I wasn’t losing Him again. 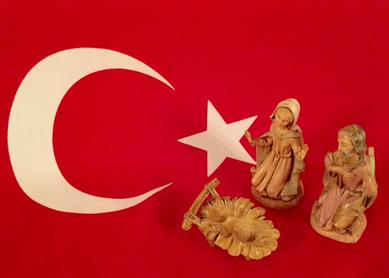