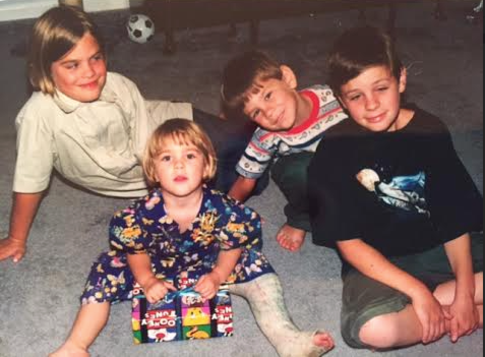 for one more visit

As afternoon gathers and my computer powers down, at times I gaze with unfixed eyes at the pictures on my bookcase and nostalgically bring memory’s children out to play.

The five of us build with Legos and read stories; we work puzzles and talk. We laugh and joke and hold mock courts where I am judge and jury. Midafternoon we take long naps. After simple suppers we wash the dishes and go to bed to wake to meet another day.

Sometimes the children fight among themselves, and one or the other is often getting injured. But no fight lasts past bedtime, and injuries always heal.

Hurt feelings are cured with hugs and the formula I taught them from the time they could talk:

“I’m sorry. Please forgive me,” the injuring party says. And the injured replies, “I forgive you,” whether the sentiment is felt or not. But in the saying, a magic happens, and all is well again.

Bath times are splash fests and Sunday mornings include frenzied searches for socks in locations as varied as the hills of upstate New York and the desert near Tucson. We climb trees in an Indiana apple orchard and swim in north Georgia.

I linger over memorable “firsts”: One’s first spoken word was “ball” as he pointed at a German moon; another’s first read word was “Delta,” an obvious sign of too much time in airports. They all slept on the family’s black Lab as a first best friend.

And truth be told, they were the first people to completely own my heart.

I keep my trips to these older, headier days brief. But while I’m there, I feel the adrenaline rush of being the epicenter of four small worlds.

Then present day, in going through some drawer or rarely opened box, I run across a letter from my early parenting years, returned to me by its recipient for the story it holds. Written to sympathetic eyes, the letter’s contents remind me of the tedium of being a de facto single parent, half a country or more away from “home.”

I hear my fatigue and at times exhaustion bleed through accounts of homeschool field trips and routine grocery stops. I sense discouragement in sitting by another foreign hospital bed or in another doctor’s waiting room.

I realize that though every day might have ended in peace, it was a peace re-won at times on an hourly basis. And that nap was never long enough.

As a children’s literature scholar I long since learned the truest definition of nostalgia is “longing for a past that never existed.”

And so I acknowledge that the Golden Age of parenting might actually be gilt, all the while indulging myself in one more visit. I wax nostalgic for a time that never existed, but for children who did — and still do in memory’s house and in my heart.