Once I wanted to make a quilt for my son. He likes purple, so I went to buy fabric and came home with three yards of Labrador retrievers, a red that went along nicely, and a deep brown. I chose a pattern that would accommodate fussy-cut dogs and allow a minimum of the deep brown. Because, you see, the quilt was going to be purple.

The only light gray I had was in a Roll Tide plaid I bought years ago intending to use as trim around a set of Christmas placemats. (Sorry, Christy. I hope you still like the board game I got you instead.)

The dogs alternated with the brown to form a four patch, and the red paired with the plaid to connect the four-patch units into a frame. Still no purple, but I would fill the frame with sampler blocks and there would be purple to spare.

The brown continued to dominate, and I needed lots more bluish red to ever get to purple, so my sampler blocks developed in pinks, blues and dark grays. I began to add whites, creams and yellows, too, because if purple ever got into this quilt it wouldn’t be noticed until I diluted the brown.

With creams and yellows, my quilt began insisting on greens. I added vegetable garden and blue spruce, pale mint and cucumber. Before I knew it, the center of the quilt was done. Still no purple, but I needed yards more quilt to cover 6 feet of child anyway. I would add borders.

Usually a peaceful phase of quilt construction, borders presented another problem. I wanted to attach a soft black or red and be done with it. But while the quilt yelled, “Finish me!” My brain screamed, “Purple!”

I put the quilt top on the sewing room bed and let it talk to me as I walked by. It was there so long, the children started napping on it. The intended recipient once confessed he had drooled on it a little as he slept.

To buy time, I sewed a one-inch border of cream on mocha around the framed sampler center. Those softened shades mitigated the deep brown a bit, but they did nothing about adding purple.

In desperation, I shut the door. I thought perhaps I was imagining the words coming through, so I asked a quilting colleague about it. She said once a quilt had yelled at her night and day until she finished it.

Since closing the door didn’t work, I started taking the quilt to fabric stores. I decided I needed a bold floral print to compete with the busyness of the sampler blocks.

I found one in reds, blues and greens. I put 5 inches down each side and slightly more at top and bottom. The print was so elaborate that it needed reining in, so I added three more borders: a small dark blue, the Alabama plaid again and a softer tone on tone brown to end it.

It’s all over but the quilting now. And still no purple. 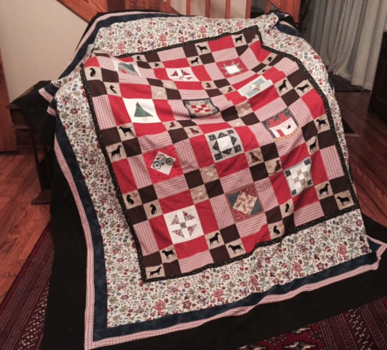