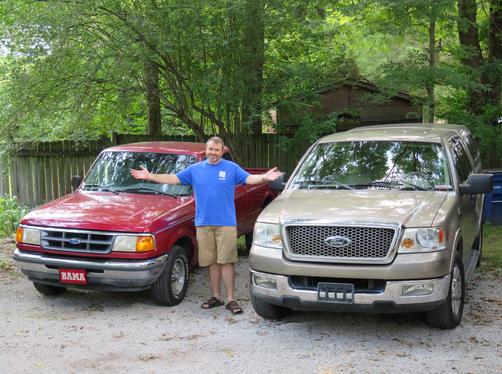 For the past decade, I have longed for an old pickup truck to call my own. And now I have two.

A series of unrelated events has led to this bountiful blessing in the truck department. Now, if I can just hold on to one of them.

When I bought a $500 Chevy from a coworker several years ago, my bicycling buddies said my priorities were in the right place because my bike cost about four times more than my truck. But soon, I ended up giving the vehicle to Son No. 3 and I was without a pickup again.

A few years later, I bought another Chevy with 178,000 miles on it. The idea was to let Son No. 4 drive it to school and work, but I would have access to it when needed. Of course, when a teenage boy gets the keys, he disappears and takes the truck with him.

The old Chevy served him well until it was totaled this summer on Wilson Dam Road. Then the search for a replacement vehicle began.

Knowing I wanted an old truck, my kind wife persuaded me to look for a pickup to call my own. The plan was to buy a truck for me and shuffle our family’s fleet around so Son No. 4 would have a car.

My intention was to find another small truck, but our mechanic put us on the trail of a monster-sized 2004  F-150 quad cab with only 53,000 miles on the odometer. It turned out to be too good a deal to turn down.

And then things got complicated.

About two weeks later, my 92-year-old dad decided he was going to stop driving. He called on his children to determine what to do with his 1993 Ford Ranger.

The old truck needed tires, brakes and major air conditioning work, but it only had 67,000 miles on it. And the sentimental value was too strong to pass it up. We went on many great fishing trips in that pickup. So I wrote a second check.

The custom in our household is to bestow nicknames upon our vehicles. For example, Daughter No. 1 used to drive The DOOF because that’s what the license plate spelled. Daughter No. 2 now drives a car named Marvin because, well, I’m not really sure.

We call the latest editions to our fleet The BAT, short for Big Ass Truck, and PawPaw, which is what the grandchildren and great-grandchildren call my dad.

I don’t know how long I will keep two trucks. It seems excessive, paying maintenance and insurance times two. But after a decade of wishing for a truck, and seeing them all escape, I may have a hard time letting go.