How could I forget?

Sunday is March 6, celebrated as Alamo Day by Texans — when they remember.

I don’t need a specified day to remember the Alamo. All I have to do is mentally revisit our last son’s junior year of high school.

When Son No. 4 missed five days of school with the flu, he assured me the make-up work would be no problem. Specifically for history class, all he had to do was complete a worksheet on “The Alamo.”

In my relief, I skipped any sarcastic comparisons of school buildings and movie theaters. I realized his factual knowledge of American history might suffer from watching the film, but his average wouldn’t. I would even watch the movie with him. First all I had to do was find a copy of the DVD.

How hard could this be? (I’ve got to quit asking that.)

Over the next five days my quest-stops were as follows:

Netflix (This one had been in my living room the whole time.)

Amazon (Sure they had it, but I needed it NOW.)

The public library — ah! Pay dirt! The DVD was checked out, but due back that very afternoon. I staked out the circulation desk, made friends with the librarian, and waited. When I had to leave just before closing time, I explained my plight and begged her to hold the DVD if it were returned that night.

“We don’t hold DVDs,” she explained. I cajoled a concession from her. If the DVD were found in the curbside box when she checked in items for the night, she would call me.

I began instructing Son No. 4 to tell his teacher that we couldn’t find the movie. The teacher started telling him to copy someone else’s worksheet. In a sudden rush of ethical behavior, his classmates were saying he couldn’t cheat off their papers.

At this point, I offered to fill in the worksheet myself. Surely I could remember something of the movie I’d seen 20 years ago. Son No. 4 refused to show me the questions.

Then inspiration hit on a routine drive past Best Buy. There in the racks of DVDs I found the John Wayne Movie Collection. I scanned the included titles and saw “The Alamo.”

I stood staring at the $50 dollar price tag and weighing my dedication to my child’s education. All the while I cursed a system that still favors children born into families with greater economic resources.

No, I thought, I won’t buy it. I’ll show solidarity with the impoverished everywhere.

But as I reached to return the box, I had the horrifying thought that my inaction might prevent Son No. 4 from walking across some future stage to the strains of “Pomp and Circumstance” — the most beautiful music in the world to parents of a teenage boy.

So I swiped my debit card, went home and pushed play.

I corralled Son No. 4 on the couch next to me, and demanded he produce the history worksheet as the opening credits to the 1960 film began.

Glancing at the first question, I raised my head in confusion. “When does John Wayne go to Washington?” I asked, then moaned. “These questions don’t fit any scene that I remember.”

And then Scott made a bad joke. “Maybe,” he said, “the questions are for the Billy Bob Thornton version.”

Only it wasn’t a joke, even if the Thornton version might be. I can’t comment either way, as I’ve never seen it. When Son No. 4 explained to his teacher the mix-up in movie versions, the teacher said time was up on the assignment. 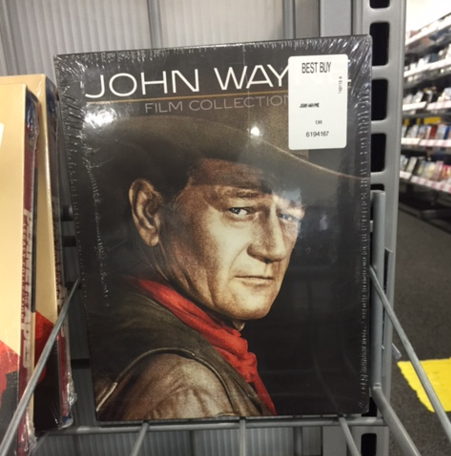