When my husband and I married 10 years ago, we were well into our adult habits and routines. After a brief courtship, condensed engagement and early morning wedding one Saturday in June, we began a crash course in getting to know each other.

I didn’t know his middle name or birthday, which led to some interesting conversations with medical office personnel when I tried to use his insurance.

He also didn’t know my birthday — although that really isn’t a good example of how far we’ve come because I’m fairly sure he doesn’t know it now. He didn’t know why I was on year nine of an indefinite chocolate fast. More to the point, he didn’t know my peculiar relationship with phones.

As a newspaper editor, he generally had one — at home and with him throughout the day. In the spirit of new love, I told him I didn’t mind if he kept the ringer turned up on either one. However, I felt he should know I had no plans to answer them. One day it occurred to me that the landline had an answering machine connected to it, so I abridged my policy and turned that ringer off entirely. The one in his pants still vibrated, but there was really little I could do about it while he was at work.

Unfortunately, occasionally, I needed a phone myself. We had six children between us who were always going to one doctor or another, and there was still that pesky little detail of insurance claims wanting his birthdate. So when my phone from 2003 fell to pieces (just two — the numbers on one side and the screen on the other), he bought me a new one. And although I was grumpy about learning to use it — the go-to response for any minor change in my life — I came to love my Cherry Chocolate. While working on my graduate degree, I went around showing it to my 20-something fellow students who were connoisseurs of technology. They responded with gratifying “oohs” and “aahs.”

Now I have colleagues 20 years younger. But when I show them my Chocolate, the response has become a single puzzled “oh.” More annoyingly, the Chocolate has taken to deciding who I will call and when. As a reincarnated Hal, it desires to control my life. Usually calling my favorite people, it also reaches into my distant past to the numbers I keep just so I know not to answer. When I try to make a call or access a text, the screen scrolls on an endless loop until I close it and try again. And again. And again.

When it seemed I’d missed my lunch date yesterday, I realized I might actually need a phone again even though I’ve known Scott’s birthday for a while now. Family pressure had been building for the past 2 ½ years anyway, and I, like my phone, was wearing down.  (The one in my school office doesn’t work at all, proving that there is a conspiracy operating here.)

So last night, we sat across a desk as a salesman walked me through the steps of buying a new phone. Like the students’ experience in every class I teach, I found myself thinking, “Words keep coming out of his mouth, but what do they mean?”

To make them stop, I bought a phone and case and screen protector. The child salesman programmed in my secret code—the one every family member knows. (How else can they answer it for me?) And I went home to mourn my Cherry Chocolate. But at least I’ve postponed any harsh reminders of its demise. On my new phone, the first thing I learned is how to turn the ringer off. 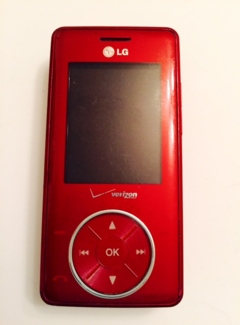