I suppose it was only natural that in the midst of millions of people in New York City, we would seek out something to remind us of home.

And so, last month, a group of college students and I stood in line at Bubba Gump Shrimp Co. for over an hour.

The line snaked through the lobby of the restaurant past a big-screen TV where Forrest Gump ran the wrong way in his Crimson Tide football jersey. It spilled outside under the giant flashing billboards of Times Square where throngs of humanity pressed against one another and impatient taxi drivers honked their displeasure at the very concept of red lights.

“Forrest,” I thought, “I’ve a feeling we aren’t in Alabama anymore.”

Taking college students to educational conferences is an adventure, full of jitters over a first flight or concerns about the unknowns lurking in a major city. Some of my students have never been outside the state.

But New York City was doubly exciting because it was my first trip, too.

Our crew joined hundreds of students and advisers at the Spring National College Media Convention. We listened to well-known journalists like Byron Pitts, co-anchor of ABC’s “Nightline.”

When the afternoon sessions ended, we hit the streets where adventure lies in every direction, from Central Park to Staten Island, from “Les Miserables” to Wall Street.

The highlight was entering the old Ed Sullivan Theater for  “The Late Show with Stephen Colbert.” Between taping, Colbert chased TV comedian/journalist John Oliver through the audience. He hit golf balls into a net with then-PGA Masters champion Jordan Spieth. He goofed off with the audience and laughed through retakes to correct the bloopers.

Each of us had an indulgence that required due patience from the group. We stood in line at M&Ms World while a student with a lot of friends had their names embossed into the colorful candy that melts in your mouth, not in your hands. There were the logistics of a subway and ferry ride. One student — we won’t mention names here — ran out of money shortly after arriving and had to borrow cash from the resident loan shark (his adviser). Another student — who doesn’t own a CD player — became a little more street-wise after being hustled out of $20 for two really bad rap-music CDs.

Our street entertainment ranged from a hostile-looking dude wearing nothing but a diaper to a guy on stilts in a Statue of Liberty costume.

The Big Apple is great, a wonderful and unforgettable experience. Count me among those who love NYC.

But by the third day of conference sessions and crowded sidewalks with the wild and the weird, I was battling agoraphobia. I longed for solitude and quiet, a bicycle ride between cow pastures and cornfields, a kayak trip down clear creeks or a hike through the serene woods of home.

Through the press of the crowd, I could hear a voice whispering in a Southern drawl: “Run, Forrest, run!” 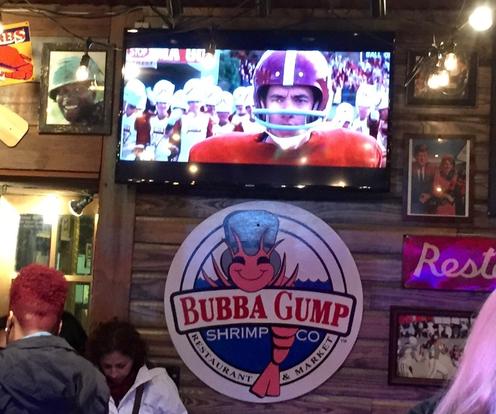