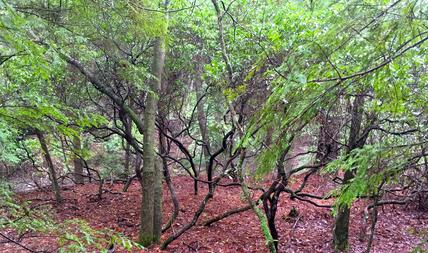 Although I have never been lost in the wilderness, there have been occasions when I did not know my present location.

But I knew if I kept going in one direction I would arrive somewhere, and perhaps by some miracle it might be where I intended to go.

Sometimes, however, there was a catch.

A good mountain laurel thicket makes it almost impossible to travel in any direction, even for the hiker who knows where he’s going.

Once, while bushwhacking with a loaded backpack high above Quillen Creek, I was determined to pass through a jungle of this dense native shrubbery because it blocked my path. Soon I was down on all fours, unable to move north, south, east or west. Green, leafy octopi grasped my arms, legs, body and pack, intent to hold on until they subdued their prey.

From a distance, mountain laurels look harmless, even beautiful. They are a complex botanical with small blooms “as crisp and round as china teacups,” according to the May 2009 edition of WNC Magazine. The blooms may be dainty, but the trunks and limbs are another story.

Pioneers called colonies of these plants “laurel hells.” Topographical maps of the Appalachians list names like Huggins’ Hell and Jeffrey’s Hell, apparently in memory of the poor men trapped by the laurels.

In his 1913 travelogue, Horace Kephart wrote that these hells were “impassable save where the bears have bored out trails.”

I have explored some of the same spots that Kephart wrote about and slept in a primitive shelter in the Great Smoky Mountains named for him. I have had too-close-for-comfort encounters with the bears from his beloved mountains. I have slept on the hard ground and shivered through the dark nights of February and March in the name of adventure.

But, as a middle-aged man, I have swapped my tent and sleeping bag for the Hampton Inn and the warm company of my beautiful wife. I have traded in my camp stove and freeze-dried beef stew for the nearest Cracker Barrel or Logan’s Roadhouse.

And if I get nostalgic for laurel hell, all I have to do is pick up the remote control and watch the latest presidential debate.