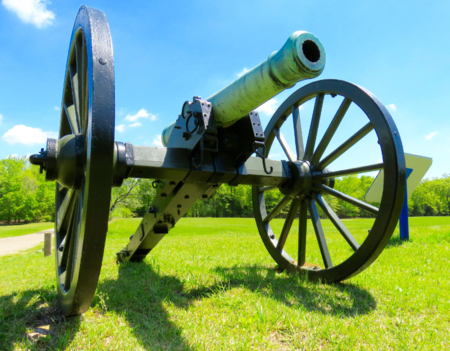 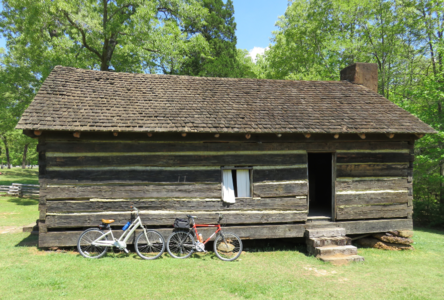 A pleasant spring day is perfect for a bicycle tour of Shiloh National Military Park. The well-marked battlefield tour covers 13.5 miles of gently rolling terrain. If you ride down to the Indian mounds or to Pittsburg Landing, however, be prepared for a steep descent and a sharp climb back out. The roads are paved and mostly shaded, but watch for a few potholes. Shiloh is southwest of Savannah, Tennessee, off Tennessee 22.

no house of peace

By Scott Morris
​
We left home in the Shoals on a Saturday morning for the one hour and 15 minute drive to Shiloh National Military Park, with our bicycles attached to the back of the SUV and a picnic lunch in the cooler.

We started our battlefield experience with the 45-minute documentary “Shiloh: Fiery Trial” and ended it with a sense of relief.

The battle here was both bloody and pivotal, claiming 23,746 casualties and enabling the North to control railroads and rivers in the west.

The conflict that raged in southern Tennessee seven score and 14 years ago still lingers in the hearts of the vanquished, as we reluctantly acknowledged near the mass grave that holds an unknown number of Southern men.

Intellectually, we realize that losing the Civil War was the best thing that could have happened to the South for many reasons. Slavery was a shameless practice that cursed the entire nation from the beginning. And, despite economic and cultural challenges that remain in the South, where would we be if we had been left on our own? With industry concentrated in the North, we would likely be just another Third World Country.

But during our tour, we felt proud of the outnumbered and underequipped Confederates who surprised the Federal troops and pushed them back toward Pittsburg Landing on the first day of fighting.

As we ate our lunch on a blanket spread next to the National Cemetery, we wondered how to resolve these feelings with our support for civil rights, integration and Black Lives Matter. We discussed our mingled legacy of pride and shame, our conflict in this place called Shiloh.

And what would I have done if I had been indoctrinated into that culture alongside my brothers and sisters? Would I be enlightened and courageous enough to abandon my family and friends, and join the Union Army?

Who am I kidding? I would have worn gray.

And with my girth, I would have made a fine target for even the most nearsighted Yankee.