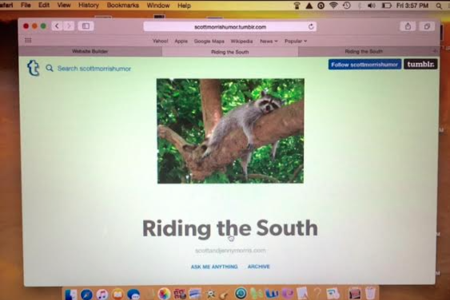 When Scott suggested we start a blog a couple of months ago, we did. Virtually that night. We kicked around a few name suggestions, settled on “Whistlin’ Dixie,” and posted on tumblr under scottmorrishumor.

Then we found that “Whistlin’ Dixie” or some variation of it was already being used as titles to a country music song, multiple novels, a LGBT activist group, a store and a tribute to the paper cup — to name just a few of the multi-thousand hits our Google search provided.

So we began to consider other names for our blog.

At the same time, readers from Scott’s newspaper column days were happy to hear he was writing again but unable to find our blog when they searched for it. Or if they found the blog, they couldn’t find the post they wanted without completing the registration process for our site.

We thought, how hard can this be? So one day, attempting to show a friend a picture of the resident cat from a blog illustration, we started the registration process and gave up 10 minutes later.

So as well as discussing a new name, we started wondering about creating an easier way to access our blog. The answer to easier access was obvious. For less than 75 cents a week, we can have a web address that displays recent posts and links to our archives. You might be reading from it now at scottandjennymorris.com.

The name change wasn’t as easy. After our first too-popular pick, every suggestion led to a Google search. And most of the Google searches led to the name of another country song.

Still searching from names as varied as “you can’t make me” — our state’s unofficial motto — to “red clay through a dark lens” — Jenny’s esoteric pick, we kicked around ideas that comment on the things we love and things we love to disdain. We settled on our 38th suggestion: Riding the South.

We’re both Southerners by birth, and to a certain extent, by choice. In an earlier life, Scott could have easily moved north, but hurried back to his hometown rather quickly. Jenny’s return to the South was more complicated and after much more time in parts foreign and domestic. But if Robert Frost’s words in “The Death of the Hired Man” are true, then the South always has been and always will be home for Jenny as well.

We hope you enjoy reading our observations as we write about the South and ride the South, taking it to task from time to time. Perhaps you’ll see a little of yourself in our hobbies, Scott exploring Southern landscapes and Jenny practicing Southern arts. Once in awhile you might share our frustration with our fellow Southerners or global kin. However you approach us — through Facebook, Twitter,  Linkedin, tumblr.com, or here — we’re glad you’re riding the South with us.