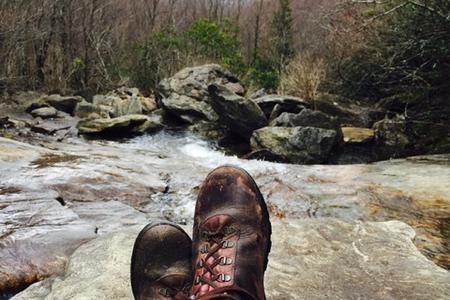 This morning I stood at the door and watched Scott scrape frost from Daughter No. 2’s car windows. He did the entire front windshield, even though I’ve explained to him that people her size only see through the bottom 12 inches.

The car was parked a few yards from the trash can and recycling bin he had taken to the street the night before.

When he came back in from cleaning the windows, he said, “It’s cold out there,” in his “don’t-run-off-to-work-without-a-coat” voice.

Then he kissed me goodbye and turned to pack his lunch.

I grabbed my lunch made of leftover steak from his latest afternoon of grilling, and went through the basement to exit the house. First, I stopped to pick up my goose down jacket from the rack he set up for less-often worn garments.

This afternoon, when we both get home from work, he’ll tease the cat until Daughter No. 2 protests, and then he’ll tease her. He’ll turn and ask me if we’re going anywhere before he sheds his work clothes.

Are we? I don’t know, and he won’t care. Tired of home cooking? Let’s go out. Tired of Netflix? There’s a new movie playing. Tired of the world? That recliner looks mighty good.

Weather permitting, the weekend will find him on a bike or in a kayak. Weather inclement, he’ll hike some nearby trails. Whatever he does, I’ll sleep through the first few hours of it. Then when he returns, we’ll go to the grocery store where he’ll do the heavy lifting and push the cart.

We’ll spend the evening catching up on house chores. I’ll run the wash and he’ll fold it; then whoever remembers to will put it up.

Sundays find us worshipping together, most times in a church.

Before we’ve even looked for it, a new week will come. But Scott will be the same — even tempered, kind, considerate, funny, encouraging and, most of all, content.

Maybe one day Alabama will have a lottery. I doubt I’ll even notice except for the increased traffic to the liquor store down the street. And I know I’ll never buy a ticket. Why should I?