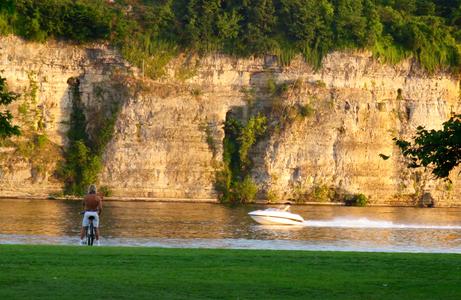 Recently Scott decided we could do with a little more room in our backyard for the used car lot our home regularly impersonates. So he suggested we take our utility trailer and leave it with Son No. 1 and his wife, yard sale shopper extraordinaire.

I wasn’t so sure. We’ve been hauling that trailer from house to house for over a decade now. If we’ve needed it all these years, I argued, don’t we need it still?

When Scott pointed out the surest way we’d ever use it again is to move, I said, “How quickly can you hitch it to the truck?”

For reasons that might as well not be explored, I was the one driving when we went to Hartselle. As the engine revved and the trailer tugged, Scott commented, “It’s different towing a trailer, isn’t it?”

“Yeah,” I replied, “but sometimes you don’t even know it’s there.”

Like the time pastor’s wife Anita and I decided we needed to run a quick errand on a Saturday afternoon.

I don’t remember why Anita needed to stop at the vet’s. We didn’t wrestle a dog into her back seat or chase down the cat. Whatever the impulse, we went out her backdoor and climbed into whichever vehicle was parked three feet from the steps. I do remember walking around the hood and turning right to claim shotgun, but it was just the two of us, so no contest.

We had an uneventful ride to town but were a couple of hours too late to pick up whatever Anita wanted. Oh well, it had been a pleasant drive and now all we had to do was turn around and head back home.

When she looked into the rearview mirror to back up, she found herself staring at her husband’s boat. Towing the boat had been no problem — we’d never even noticed it was there. But backing the boat in a tiny parking lot was a different story.

Just a couple of years home from my two-year stint in Turkey where streets were sometimes optional, I pointed out that all that stood between us and the road were a couple of curbs and some yard. If it were me, I’d drive straight ahead before I’d back that boat. So straight ahead we went, over the curbs, through the landscaping and bumpity bump back onto Highway 31.

The technique worked so well, we would have high-fived each other as she drove, but we were too busy marveling about the novelty of a boat shadowing us wherever we went.

Meanwhile back at the ranch — the four-bedroom ranch that serves as the church pastorium — Brother Randy had wandered outside to NO BOAT. He was still standing in the driveway when we got back.

I don’t remember exactly what he said. But I’m pretty sure it went something like this: “How could you not know you were pulling my boat?”In retrospect, I think he held things together rather well. And me? I’d gotten a great lesson in how to tow anything. Just drive straight ahead and pretend it isn’t there.