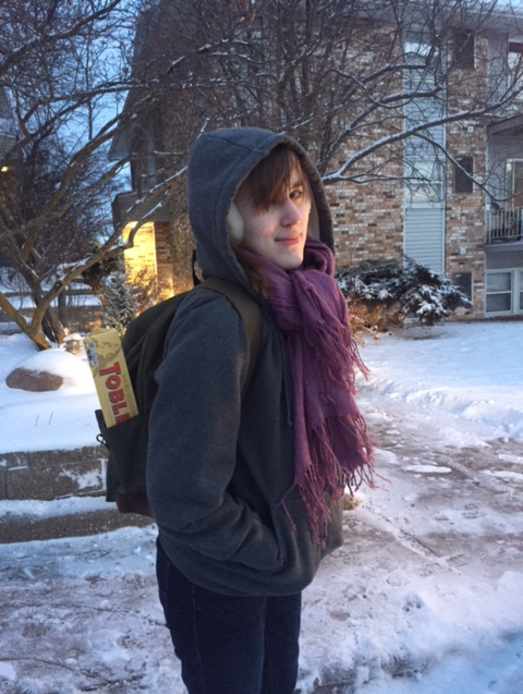 The incident that will lead to Scott’s impending incarceration started as a law-abiding endeavor on the part of his wife, yours truly.

When Daughter No. 1 up and moved to Iowa (see “Jenny Makes Peace with the F150), I rashly opened my mouth and said to her, “You’re not so far away from home. Come Christmas, Dad and I will come visit you. We’ll be here on the 26th and stay a week.”

Then Scott and I got in the truck and started home to Alabama. We drove and we drove and we drove. Well, Scott drove, but you know what I mean. Then we stopped at a hotel, got up the next morning, and drove some more. By the time I got home, I had rethought my hasty promise several times.

On our first phone call after dropping her there, Daughter No. 1 assured me that Iowa was safe and a fine place to live — not that much different from Alabama. But she was counting the days till Dec. 26th.

A promise is a promise, I reminded myself, so I set about keeping mine though it was still only September. Step one was obvious. I had to buy Daughter No. 1 a sleeper sofa. Although a week in a hotel isn’t the worst prospect, for roughly the same price I could get the sofa and always have a place to sleep in Ohio — I mean, Iowa. (Daughter No. 1 moves around a lot.)  Too, my miscalculations as to moving-truck size for the recent relocation resulted in her erstwhile sofa being doused in rain water and left on a garbage heap in Cincinnati. (Why I was left in charge of calculations for the size of the moving truck is one of life’s unsolvable mysteries.)

I told Daughter No. 1 to actually pull out the sofa bed before purchase and try the mattress. Scott and I would be sleeping on it for a week, after all. About the time pictures of the new sofa started to arrive on my phone, Scott started to announce he was particularly susceptible to cabin fever, and although he would be driving me to Iowa as promised, he would be staying in a hotel. If nothing else, the travel between Daughter No. 1’s apartment and the hotel would be an outing. I started looking around for a different travel companion.

Daughter No. 2 fit the bill nicely. So around 7 a.m. on Dec. 26th, she and I drove away, leaving Scott in charge of The Resident Cat. The internet directions site projected 12 hours of travel time; I secretly hoped to shave at least 30 minutes off of that. To wit, we made only pit stops on the way, cooking sausage balls in a mini crock pot plugged into a cigarette lighter for our meals.

Fourteen hours later, at a balmy 2 degrees in the Des Moines suburb of Altoona, we pulled into the apartment complex parking lot. We unloaded the car as Daughter No. 1 insisted I go to park on the street. She was adamant. No visitor parking is allowed in her lot.

So I parked on the street and then scaled two walls to get back to her apartment. They were low, and mostly decorative, and I fell only once. I consoled myself that a little snow on my jeans was better than a booted car. Then I hibernated for the next 36 hours.

When we next ventured out, Daughter No. 1 began to excavate my car from the snow and I watched as the wipers swished what, for all the world, looked like a parking ticket on my windshield, issued, it turns out, for parking on the street within 48 hours of a snowfall.

When I realized the fine was $5, I decided to quit obsessing over the Catch-22 of one sign that instructed me to park on the street and an ordinance that forbade it in the almost guaranteed event of snowfall in Iowa. Besides, the ticket had Scott’s name on it.

The trip home to Alabama took 15 hours. We left in minus-8 degrees, with the temperature falling. Once home, I cajoled Scott into signing and thereby admitting his guilt to his traffic infraction by pointing out that without the correct signature on the dotted line, the fine might not be considered paid. Without a paid fine, he would be subject to a citation issued by the local police department and required to attend a future court date — in Iowa. We mailed the payment off in the envelope provided, and the trip became just another adventure to relive sometime in the future.

Until tonight. When Scott got the mail. And the envelope with my $5 check was returned as undeliverable. It seems the city clerk doesn’t know its own address. Daughter No. 1 keeps telling me she wishes she were closer to family but doesn’t seem that far from Alabama in Iowa. I’m starting to understand why. 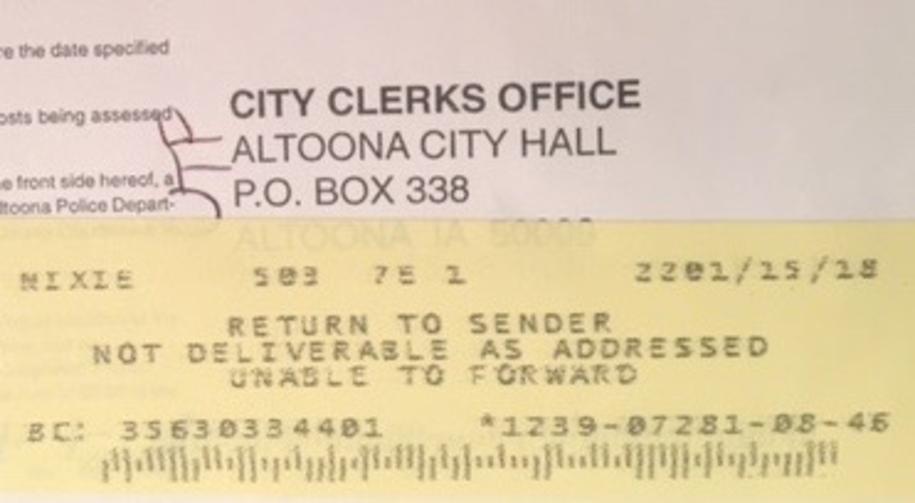